How Much Sway Does the N.R.A. Still Have?

The group’s lobbying power is diminished — but that hasn’t shaken Republican opposition to gun control.

The National Rifle Association, for decades among the most powerful political groups in the country, is on the rocks. Its president, Wayne LaPierre, has acknowledged secretly taking the N.R.A. into bankruptcy, and its lobbying apparatus is badly diminished as the organization has lost, in Mr. LaPierre’s own private estimation, over $100 million as a result of legal troubles. It’s currently facing suits from New York and the District of Columbia accusing the group of abusing its nonprofit status.

But gun violence continues unabated. In the past month alone, almost 50 incidents have occurred in which at least four people were shot. Polls show widespread public support for universal background checks — and nearly as strong support for an assault weapons ban.

For Democratic gun control activists, who for years argued that the N.R.A.’s millions-strong membership and deep-pocketed lobbying apparatus were unfairly holding Republican leaders hostage, this becomes a moment of truth.

“We’re just at the start of the fight for background checks in the Senate, and it’s coinciding with the first of many trials the N.R.A. is going to have to testify at,” John Feinblatt, the president of the advocacy group Everytown for Gun Safety, said in an interview, referring to the New York lawsuit. “The public’s demanding measures like universal background checks while the N.R.A. is stuck in court. And there’s no question about it that elected officials are paying close attention to this.”

But so far, there’s only the slightest indication that a meaningful number of Senate Republicans will come around to supporting gun control.

Last month, Republican senators mostly treated a hearing on gun policy as an opportunity to ridicule Democrats for pushing too hard to pass restrictions. And as the nation was convulsed this weekend by reports of yet more mass killings in Texas and Wisconsin, G.O.P. lawmakers either stayed mostly mum or reaffirmed their staunch opposition to gun restrictions.

“Over and over again, we see Democrats play this game,” Senator Ted Cruz of Texas said on Fox News on Sunday. “Whenever there’s a shooting, they immediately push their agenda, which is disarming law-abiding citizens. That’s unconstitutional.”

On Friday, after news arrived of another mass shooting the day before in Indianapolis, President Biden expressed outrage and urged Republicans to join Democrats in passing a bill to guarantee universal background checks.

“Gun violence is an epidemic in America,” he said. “But we should not accept it. We must act. We can, and must, do more to act and to save lives.”

There’s some limited evidence that some Republicans are moving. Senators Patrick Toomey of Pennsylvania and Susan Collins of Maine have privately signaled their openness to confirming Mr. Biden’s pick — David Chipman, a longtime gun-control advocate — to head the Bureau of Alcohol, Tobacco, Firearms and Explosives, an agency that the N.R.A. has historically sought to weaken, often by keeping its directorship weak or vacant.

Mr. Toomey has long teamed up with Senator Joe Manchin of West Virginia, a centrist Democrat, in sponsoring a bill that would expand background checks for gun sales. When the House last month passed a pair of bills to increase background checks, eight Republicans voted for one of them.

All eight represent districts in blue or purple states. In a caucus of 212 Republicans, that’s a measly number — but it’s not zero. (A separate bill closing further loopholes on background checks, passed on the same day, got just two Republican votes.)Ed Goeas, a Republican pollster and strategist, said that by emphasizing the need for bipartisan cooperation in negotiations within his own party, Mr. Manchin might have earned himself some bargaining power with some G.O.P. moderates in the Senate. “Manchin’s been kind of the common voice in some of this other legislation, not going too far off to the left, so he may have a lot of sway,” Mr. Goeas said. “I think a lot of Republicans are looking to him as a compromise point.”

Asked to comment on the status of the negotiations over the background checks bill, a spokesman for Mr. Toomey reported no new progress and referred back to the senator’s “ongoing work to find a consensus with Republicans and Democrats on strengthening background checks to extend them to all commercial sales.”

But polling in recent years has reflected the effects of the N.R.A.’s steady drumbeat of anti-gun-control messaging, specifically among Republican voters. According to consistent data from Pew Research Center over the past two decades, the percentage of Republicans nationwide saying that it was more important to protect gun owners’ rights than to rein in gun ownership has been on a steady upward trajectory. As of late 2019, the last time Pew asked the public which was more important, four out of five Republicans favored protecting gun owners’ rights.

In 2016, the N.R.A. spent roughly $50 million helping to elect Donald Trump and other Republicans, making it the largest independent group supporting his candidacy. In the process, it kept the defense of gun owners’ rights at the center of Republican partisan identity, even as the party’s message reshaped itself around Mr. Trump’s white, working-class conservative brand. His administration resisted any efforts to meaningfully step up gun control.

But last year, saddled by lawsuits, the N.R.A. spent less than half of its 2016 amount in support of Mr. Trump’s unsuccessful re-election campaign. The 2018 midterms had also been the first cycle in a decade in which the N.R.A. and other gun rights organizations were outspent by gun control groups. On Capitol Hill, the group’s sway is seemingly diminished, as internal conflicts led to the departure in 2019 of its powerhouse lobbyist, Chris Cox.

But a spokeswoman insisted that the organization was still a force to be reckoned with. “The N.R.A. is engaged at both the state and federal levels, and we continue to make great strides,” said Amy Hunter, the group’s director of media relations, writing in an email that a number of state legislatures this year had passed new laws expanding the right to publicly carry a firearm.

At the federal level, she said, “We are fully engaged and any suggestion to the contrary is purely wishful thinking on the part of our detractors.”

Although polls show that G.O.P. voters tend to support some individual gun-control proposals — including instituting universal background checks on gun purchases, and preventing people with diagnosed mental illnesses from buying weapons — the overall aversion to restrictions on gun ownership is often sufficient to persuade Republican lawmakers to oppose any such legislation at all.

Mr. Goeas, the Republican pollster, said his own research indicated that people who possess a range of firearms, while a minority of gun owners, largely formed the activist core of the N.R.A.’s membership. Gun owners who “are as much a gun collector as they are buying that weapon for hunting or self-protection, they are going to be the loudest voice,” he said. “And quite frankly, they are the biggest contributors” to the N.R.A., he said.

Since those gun owners are the least likely to support restrictions, the N.R.A.’s dominance has helped harden opposition to nearly all gun control.A Gallup poll this year found that seven in 10 Republicans said they were satisfied with the nation’s gun laws. This starkly separates them even from independents, 56 percent of whom said they were not happy with the country’s gun restrictions — let alone Democrats, who are nearly unanimous in their desire for stricter regulations.

Mr. Feinblatt called this an example of the Republican Party being lashed to a base whose views separate it from the mainstream electorate. “Sticking with the base is not helping them right now,” he said. He pointed to the fact that the Democratic majorities in both chambers of Congress are now basically united in their support for stepping up gun control, calling it evidence of a shift in that direction over the past decade.

“If you compare this to the last time the Senate took up background checks, which was in 2013, back then Democrats and Republicans opposed it,” Mr. Feinblatt said, referring to the small number of Democrats who voted against the bill in its previous form. “That’s not the case anymore. Back then, elected officials in states were running away from this issue, not running toward it.” 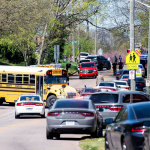