Is Biden Missing His Chance on Guns?

After six long years of legislative wrangling, Joe Biden was on the brink of victory. His historic crime bill was finally moving toward passage. Only one issue stood in his way: a controversial, 10-year federal ban on assault weapons.

Much of Mr. Biden’s legislative career could be summarized in the same way. For decades, he played a crucial role in major legislative battles over gun control, championing proposals to tighten regulations on guns and their owners. On the campaign trail last year, Mr. Biden proposed the most expansive gun control platform of any presidential candidate in history, promising to reinstate the assault weapons ban, institute a voluntary gun buyback program and send a bill to Congress on his first day in office repealing liability protections for gun manufacturers and closing background-check loopholes.

Yet 73 days into his presidency, with five mass shootings and more than 10,000 gun violence deaths having already occurred this year, Mr. Biden is approaching the issue with far less urgency. Of the more than 50 executive orders and memorandums he has given so far, none have addressed gun control. That bill he promised to send to Congress never arrived. And his use of the bully pulpit to push for new measures has been uneven to nonexistent.

Less than 24 hours after a shooting rampage last month in Boulder, Colo., that killed 10 people, Mr. Biden promised action, saying he didn’t need to “wait another minute, let alone an hour, to take common sense steps” on gun control. When pressed on those measures by reporters two days later, he seemed more comfortable waiting: He quickly dismissed the specifics of his proposals as “a matter of timing,” before making clear that his focus would be the infrastructure bill.

“Of any president in my lifetime, he has the most expansive understanding of gun violence,” said Kris Brown, the president of Brady: United Against Gun Violence. “But I’ll be honest, when I first heard that, it did not make me feel good.”

Mr. Biden wasn’t always a champion of gun control. During his early years in the Senate, he screened staff members for liberal views on gun control, won positive ratings from the National Rifle Association and opposed gun control measures. His position shifted during the long legislative battle over the criminal justice bill, which ended up being the biggest gun control victory during his nearly half a century in Washington.

For the next three decades, he approached the issue with the zeal of a convert. From his earliest days as vice president, he pushed President Barack Obama to do more on guns. After the massacre of 26 children and adults at Sandy Hook Elementary School in Newtown, Conn., in 2012, Mr. Obama tasked Mr. Biden with crafting a package of tough gun control measures — an effort that ended in defeat. Six years later, Mr. Biden went viral comforting the families of the victims of the school shooting in Parkland, Fla.

As president, he’s taking a much lower profile on the issue, focusing far more intently on efforts to pass his relief bill earlier this year and to champion his infrastructure package. It’s a position that extends throughout the administration: A day after the Boulder shooting, Vice President Kamala Harris pressured the Senate to take action, deflecting more than six minutes of questions about what executive actions the president was prepared to take.

A few days later, when asked about the issue during a visit to a school in Connecticut, she quickly pivoted from guns to promoting the administration’s relief package.

Behind the scenes, White House advisers have met with gun control advocates and are working on a series of executive orders restricting firearms. They point to $5 billion for community-based violence prevention programs that was tucked into the infrastructure bill, heralding it as a historic investment. But privately, many worry that the White House may be losing the momentum for political action that comes each time the country is yet again horrified by a mass shooting.

They also realize that the period for a new administration to accomplish big legislative goals before the politics of a midterm election take hold is relatively short. Speaker Nancy Pelosi has signaled that she hopes to pass the infrastructure bill by July 4. There’s also a second part of the legislation that deals with “human infrastructure” policies, like paid family leave and universal pre-K. Some gun control advocates fear that they are being bumped to the back of the line.

“It’s dizzying when you think about where we are and the real time we have. It’s not a lot,” Ms. Brown said. “There is no question the administration is working aggressively on the issue internally, but it needs to be communicated with the same passions externally.”

Of course, it appears unlikely that any proposal restricting guns could pass the narrowly divided Senate. Even though public support for stricter gun control measures has been creeping higher, and the nation’s most powerful gun lobby, the N.R.A., is weakened and bankrupt, Republicans have shown no indication of supporting any such legislation.

“Every time there’s a shooting, we play this ridiculous theater where this committee gets together and proposes a bunch of laws that would do nothing to stop these murders,” Senator Ted Cruz of Texas, said in an opening statement during the Senate Judiciary Committee hearing on gun violence last month, a week after the mass shooting in Boulder and an earlier one in the Atlanta area. “What happens in this committee after every mass shooting is Democrats propose taking away guns from law-abiding citizens because that’s their political objective.”

Passage of any kind of gun legislation would most likely involve Democrats agreeing to eliminate the filibuster, a procedural tactic that would allow the party to pass bills with their tight majority. And even then, some Democrats are skeptical that gun legislation would pass, given the divides within their own caucus. When asked whether he saw momentum for gun control this Congress, Senator Bernie Sanders of Vermont responded simply: “I wish I could tell you that was the case.”

With his decades of legislative experience, Mr. Biden certainly knows the odds are long. And he also knows the crucial role that presidential leadership plays in rallying the public around any gun control measures.

When Mr. Biden stood behind Senator George Mitchell of Maine, the majority leader, during that August 1994 news conference, he was quick to attribute their success to the staunch support of someone else: President Bill Clinton.

“Were it not for President Clinton, there is no possibility, zero possibility, that this significant piece of legislation would be law,” he said. “No president that I have served within the 22 years I’ve been here was willing to go out on the line, flat out, and say, ‘We’re not going to have a bill unless there is the gun ban in the bill for assault weapons.’”

He added: “That was the ultimate leverage that George Mitchell and Joe Biden had.” 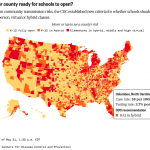 Map: Which Counties Are Ready for Schools to Fully Open?General 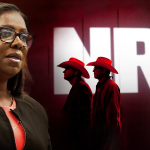