Biden Calls for Action on Gun Violence After Two Mass Shootings in A Week.

President Biden said Tuesday that he was “devastated” by the killing of 10 people at a grocery store in Boulder, Colo., and called on Congress not to “wait another minute” in enacting legislation to ban assault-style weapons and high-capacity ammunition magazines.

“This is not and should not be a partisan issue — it is an American issue,” a somber Mr. Biden said in brief remarks delivered in the State Dining Room at the White House. “We have to act.”

The attack in Colorado, in which a gunman killed 10 people, including a police officer, came less than a week after another gunman killed eight people in Atlanta. Mr. Biden noted that he had to draft a proclamation on Monday to keep — not lower — the White House flags at half-staff, because they had already been lowered to honor the victims killed in Atlanta.

“Another American city has been scarred by gun violence and the resulting trauma,” he said.

Before March 16, it had been a year since there had been a large-scale shooting in a public place. In 2018, the year that a gunman killed 17 people and injured 17 others at Marjory Stoneman Douglas High School in Parkland, Fla., there were 10 mass shootings in which four or more people were killed in a public setting.

The following year, when a gunman targeting Latinos in El Paso, Texas, killed 22 people, there were nine such shootings. “Those were the worst years on record,” said Jillian Peterson, an associate professor of criminal justice at Hamline University in St. Paul, Minn., and a co-founder of the Violence Project, a research center that studies gun violence.

But before the shootings in Atlanta last week, there had been no such killings since March 2020, according to the Violence Project.

“Atlanta was a week ago and now it’s Boulder,” said Meredith Johnson, a 25-year-old Boulder resident, on Monday as she was walking on a sidewalk across the street from the King Soopers grocery store where the shooting occurred. “What is it going to be two weeks from now?”

Earlier on Tuesday, Vice President Kamala Harris, speaking at an event in Washington, praised the “heroism” of Eric Talley, a Boulder Police officer killed while responding to the shooting. Mr. Biden also praised the officer’s efforts and offered his condolences to his “close, close family” of seven children.

Mr. Biden had not made gun control a legislative priority during the first weeks of his presidency, but his tone on Wednesday seemed to signal a shift. He called on the Senate to quickly pass two House bills, passed earlier this year and first introduced after the 2018 mass shooting at a Parkland, Fla., high school, that extend background checks to private sellers and extend the time limit to conduct checks on purchasers.

Mr. Biden said it was wrong “to wait another minute, let alone an hour, to take common-sense steps that will save lives in the future.” 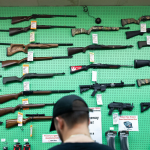 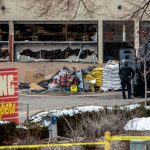